No Result
View All Result

Imisi 3D to organize AR/VR Hackathon in 7 African countries – How to apply?

Hey there. Do you love creativity, innovation and learning? Then the AR/VR Hackathon organized by experts in the game, imisi3D is for you. The Hackathon is an opportunity to learn about Augmented and Virtual Reality, and other immersive technologies. Also, you get to meet new people, while getting hands-on experience with AR/VR design and development.

Google announces the 6th class of its Africa-based Startup Accelerator

The theme for this year’s hackathon, which would hold in seven different African countries is “Creating Our Future”. The countries to host this include Nigeria, South Africa, Mozambique, Egypt, Kenya, Cameroon, Tunisia. And every country comes with their organizing partner and team, to oversee the program.

Teams interested in this are required to create solution across the following domains. Education , Healthcare, Tourism , Climate and Social Justice . To apply, you are expected to create solutions that address one or more themes. According to the hosts, these themes were chosen because it is believed that they represent some of the most challenging problems and opportunities on the continent (and the world). 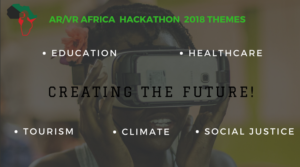 The AR/VR Hackathon will hold for 48 hours from 5pm on 20th April 2018 – 5pm on 22nd April 2018. And will be hosted at Imisi 3D Creation Lab 6th Floor, Co-Creation Hub Yaba, Lagos. This event is Imisi 3D’s first in the year 2018. Also, the fact that the AR/VR Africa Hackathon will hold simultaneously in several cities across Africa is a great one for the organizers.

Applications which opened on February 21st, would close on March 30th. Participation confirmation on March 27th. So, stay tuned and get your idea to them as soon as possible.

They are an Extended Reality (XR) creation lab focused on building the XR ecosystem in Nigeria, and beyond. They are dedicated to growing a community of African AR/VR creators, creating solutions using AR/VR, and providing educational and engagement experiences with AR/VR.

Google announces the 6th class of its Africa-based Startup Accelerator

3 years old Chipper Cash is the latest unicorn in Africa

To diversify or not? Growth Strategies Revisited